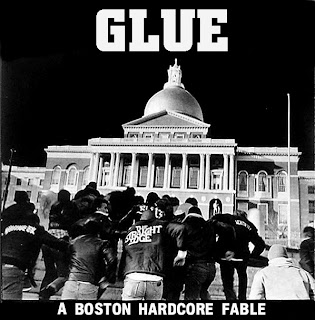 To provide some background, this past August, there was a huge reunion show of sorts featuring most of Boston’s original crop of hardcore bands—JERRY’S KIDS, FU’S, GANG GREEN and, for the first time in nearly 25 years, DYS. A few newer local bands also played and, in lieu of NEGATIVE FX, SLAPSHOT performed. This was held at Club Lido in Revere, an expansive club that had little in the way of charm but was large enough to handle such an event.

The film is being directed and edited by Drew Stone, current vocalist for ANTIDOTE and, back then, locals THE MIGHTY CO’S. Drew runs his own film production company and has shot videos with such artists as RUN-DMC, TYPE-O NEGATIVE, ONYX, BIOHAZARD, MADBALL, etc.  The film will feature interviews with people who were involved in the scene back then, be it playing in bands, DJ-ing, running spaces, promoting shows, publishing zines, etc. The film should be released sometime this year.

The show was a lot of fun, as people came in from all over the country and overseas. What a great lineup! JERRY’S KIDS blasted through "Is This My World" in order. THE FU’S played their first show with original members Steve Grimes and Wayne Maestri in years. DYS sounded tight and had 3/5 of the original lineup. Unfortunately, SS DECONTROL didn't perform although their vocalist Springa sang "Boiling Point," off their legendary album "The Kids Will Have Their Say," with one of the opening bands, REFUSE RESIST.

After the show, I met with some friends for a late dinner at the Hilltop Steakhouse in Saugus. The food wasn't too great but the discussion was productive. Half a dozen of us came up with an idea for our own film--GLUE: A BOSTON HARDCORE FABLE. And we're bringing in some people involved in the original scene to lend a hand. Springa will be the executive producer, as well as musical director. Steven Blush from American Hardcore will be brought in as a production advisor. The director of photography will be Springa’s brother Phil aka Phil ‘n Phlash, a renowned photographer who documented the early Boston era. A director has yet to be hired and filming has yet to commence but it should begin in the coming months.

GLUE: A BOSTON HARDCORE FABLE is a fantasy piece, of sorts. The Gallery East show was referred to as a hardcore high school reunion. People who hadn’t seen each other in years or had faded away from the local hardcore scene reconvened. To reminisce, to perhaps rekindle the eternal spark of youth that still existed within themselves.

So the loose concept of the film is what used to be called the Boston Crew, the tight group of friends who, as the SSD song said, gotta stick together like glue, gather for a special tour around the city. They would revisit their old haunts and try to recapture those feelings that had inspired them in the first place. The film will open with these folks arriving in Boston—some by plane, some by car, some by train and they converge outside of the South Station subway stop. Accompanied by the strains of DYS’ “Wolfpack,” they all march, 30 or 40 strong, over the Summer Street Bridge and head for the Channel, the home of many memorable all-ages hardcore shows during that era. Allegedly mob-run, it was an expansive venue populated by overly aggressive bouncers but one of the few options when bands like BLACK FLAG or SUICIDAL TENDENCIES came through town.

The reunited Wolfpack turn the corner onto Melcher Street and take a right onto Necco Street, the location of the club. And then they stop and incredulous expressions cross their faces—the club is gone, torn down and has been replaced by a parking lot. Springa had considered using Joni Mitchell’s “Big Yellow Taxi,” which laments how, “they paved paradise and put up a parking lot” but he didn’t think the original version would fit the film. So he put together a band of younger, up ‘n coming Boston hardcore musicians that he’ll front--SPRINGA’S GLUE CREW—and they’re going to record their own version.

Dejected but not defeated, the Wolfpack decide to return to one of the places where it all started, the legendary Gallery East, which is close to South Station. So they go back across the Summer Street Bridge, “Wolfpack” once again on the soundtrack, past South Station and onto East Street. More disappointment—the gallery is now the home of the Boston Health and Swim Club. One person suggests stopping in for a workout to get back into fighting shape. Many people in the Boston Crew had always been enamored of vigorous physical activity. Skateboarding, weight lifting—it made for an intimidating presence in the pit. DYS’s “No Pain No Gain” plays subtly in the background but the increasingly frustrating tour must continue.

Next stop: the Media Workshop, another early DIY space that hosted shows, starting in the summer of 1981. The Wolfpack exit the Arlington Street T (for MBTA) station on the Green Line and are once again slapped in their collective faces. The original building had been torn down many years before and the new buildings on the renovated block had an overpriced cafe on one side of where the workshop once existed and a Jos. A. Bank clothing store on the other. Music in the background—the PRETENDERS’ “My City Was Gone,” performed once again by the GLUE CREW.

Now the Wolfpack are in that region between depressed and enraged. Some want to take out their frustrations by smashing the windows of the clothing store or running through and trashing the outdoor part of the cafe but they were never really into anarchy or chaos back in the day so they get back on the Green Line and press on to what they hope will be a satisfying destination. It’s on to Kenmore Square, forever immortalized in LAST RIGHTS’ “So Ends Our Night”: “We all go to Kenmore square/All of our friends are waiting there/Trouble is brewing whenever we're around.” This song plays in the background as a determined Wolfpack climb the stairs after disembarking at Kenmore Station.

But there are no friends waiting there and trouble is indeed brewing but not the kind mentioned in the song. The trouble is Kenmore Square has long since been gentrified and EVERYTHING is gone—the legendary Boston punk club The Rat and hangouts like Nemo’s Pizza, The Pizza Pad and Charlie’s Cafeteria are nowhere to be found. That entire block was bulldozed sometime after the Rat closed in ’97 and the luxury Hotel Commonwealth was built in its place. Across the street, the building that was once the home of the Radiobeat studio, where the compilation This Is Boston, Not LA” had been recorded, is now an Uno’s. Hell, it’s enough to make a straight-edger start drinking booze instead of the Coca-Cola mentioned in “So Ends Our Night.”

It was a trip to nowhere. Everything was gone, all the old hangouts. Except one... not so much a hangout but an icon of Boston hardcore, forever immortalized on the cover of SSD’s debut 12” The Kids Will Have Their Say. The steps! The steps of the Massachusetts State House. The kids charging up those steps ready to do battle with the powers-that-be. Or, at the very least, get in their cardio workout for the day.

It was back onto the Green Line, to Park Street Station, then a determined march through Boston Common, a mini-army of angry (former) youth, as the strains of “Wolfpack” once again surge over the visuals. And there they were, the Boston Wolfpack in front of those iconic steps. Much like Rocky Balboa ran up those steps in front of the Philadelphia Museum of Art, this was a moment of victory for the Wolfpack, for the Boston Crew. Only you don’t hear Bill Conti’s “Gonna Fly Now,” like in Rocky. In their charge to the summit, the song “The Kids Will Have Their Say” is heard like a clarion call. The charge takes a bit longer than it did in 1982 because, let’s face it, guys in their 40s can’t get up those steps as quickly as in their salad days.

Once they’ve reached the top, the Wolfpack spontaneously break into a rendition of “Glue” and the song eventually fades into the original recording. They gaze triumphantly over the city below. The Wolfpack realize that while those physical locations have been lost to history and they’ve scattered into different locations and largely gotten on with their lives, the inseparable bond still remains. Like glue, like crew!

We hope to start filming in the coming months. Once it’s completed, Springa will host screenings in select cities around the country. SPRINGA’S GLUE CREW will also perform a variety of SSD classics, with the set list thankfully restricted to the first two records. To paraphrase DYS’s “City to City,” it’ll be a plague that continues to spread. So watch out—the Wolfpack is back! GLUE: A BOSTON HARDCORE FABLE. Coming soon.